Last week I had the privilege to attend the Salesforce.com (SFDC) customer and partner event: Dreamforce ’13 (#df13). It was my 3rd time after taking a year ‘rest’. I went to the 2011 and 2010 editions in that time working for another company. Salesforce for me is the most successful software-as-a-service company in the world. Back in my sales rep days I have been approached many times to come on board, like any other sales rep during the late nineties. At that moment Siebel was the way to go for salesforce automation which was acquired by Oracle in 2005. Many start-ups at that time and SFDC being one of them. I did not make the step, some did and ten years later they are the greatest. Their latest quarter was exceeding the USD 1 billion revenue mark, amazing. So, in some way they are doing things right which is an understatement. For that reason I am visiting Dreamforce. To get inspired as a marketing leader of a saas company and catch a glimpse of the things they are doing right. 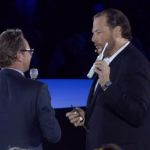 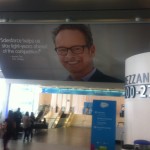 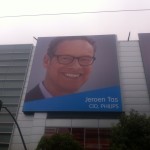 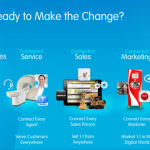 One thing that really impressed me was their level of consistency.

Me as a marketer walking around, following sessions from a slightly different angle than the average attendee. How are they communicating, what are they communicating, trying to imagine all the people who are organizing this event, how all is integrated into their marketing campaigns and so on. One thing that really impressed me was their level of consistency. Whether it was the keynote of Marc Benioff, the materials during the conference or all billboards floating around, all messaging was the same. Utmost consistency across all channels and assets. A huge billboard (20x20mtr) on the side of Moscone Center with Philips CTO Jeroen Tas on it,  and seeing Philips products, example scenario’s during all presentations. Jeroen Tas was also invited on stage by Marc Benioff telling his story introduced by a sleek video where he explains what value Salesforce brings to Philips. You feel and experience that the story of Benioff is through out the whole company in it full extend. Many hours of preparation and practicing and strong management of the content during Dreamforce. This is my main takeaway: the strength of having one story from top to bottom, from boardroom to partners confirmed by customers. Many ideas and thoughts about how to move on with Exact Online with some draft storylines already created on my way back in the plane. One tip for next year: move to Vegas. The current number of attendees is simpy too much. Besides the Moscone Convention center 6 additional hotels were required to host all sessions. That isn’t simple practical anymore. But other than that, only kudos.