Over the last few weeks several people were asking me: ‘Hey Mark, did you see that movie about Jobs?’ The answer was no and reason for that was that I heard from many people it wasn’t such a great movie. Sometimes things happen in a way you wouldn’t expect. Some people, at least I call it serendipity. Last week I found out that movies and TV series in the Google Play store are now also accessible from The Netherlands so I started browsing through their lists of movies. I like non-fiction and thus was browsing in the documentary section. There I found this movie ‘Jobs‘. Together with my Chromecast I can simply view it in HD on my TV fully controlled by my Nexus 7. Hmmm, watching Apple enabled by Google. Maybe it is because of the spare time I now have around the Christmas days. Creates room in my head for other things than Exact and Triathlons only. I never read but also started reading the book ‘Dogfight‘ about the rivalism between Apple and Google.

Watching the movie for me was also getting back into my own career. I once started as an Apple sales person back in ’89. My father at that moment was working for Apple Computer in The Netherlands running the marketing department. After his period at Sperry Univac and WANG he started at Apple. From that moment our home office was a sort of science fiction area beloved by myself and my friends. I was able to show them things they had never seen before. Today it all seems so obvious but I can still remember the first time I was looking at a color display at home, just showing pictures in millions of colors on a monitor was unbelievable at that time. Or the first time I was running a beta version of QuickTime on a Macintosh. the first time I was running a beta version of QuickTime on a MacintoshIn the size of a stamp, in 256 colors a video was running on the screen, astonishing! At that time mono-color, green color courier fonts were the only way things were displayed on a monitor. That was really a great time. I used to program on MSX computers but now having such tools within my reach I started to create animations in Macromedia Director and earned some money with it. Once I started the Macintosh SE and IIfx were there. I saw all models coming like the Classic, LC, Performa, PowerBook, Centris and even versions with Windows running on it and a TV build in.

Watching the movie I realize that there are many gaps which are not covered. I started to read some wikipedia articles about the product roadmap of Apple and realize many non computer products passed by. Like the CD player, a digital photo camera, a true gaming console, a kind of internet appliance and the best of all, the Apple Newton. This was a project that was started under the responsibility of Sculley but it did not really succeed. Nevertheless it was the beginning of a new era since the original project leaders of Newton started their own company Palm. This for me could be seen as one of the most important developments in the IT industry that made us come where we are today having smartphones, basically powerful computers, pda’s in our hands. I still have a Newton and when you think of it, when it was released Apple was its time way ahead. But it was not the Newton that made Apple come back. 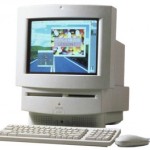 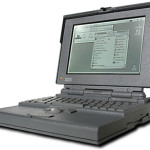 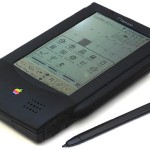 Respect for the belief

It was the iMac that made Apple come back. ‘Just a Macintosh’ like all previous models but with an adorable design available in many colors. Well, at least from the outside it looked like that. And that was enough because the market loved it and started to buy the iMac en masse. But seeing the real story behind it I realized watching this movie. Those crazy guys who started building a computer for personal use, that created freedom of spirit and mind, enabled all individuals to create what they want, what they believe in, at that moment they started to change the world. Changing the world stopped when Jobs left Apple but once he came back they picked up again. That scene with Jobs looking at all kinds of designs and asking Jonathan Ive who he was and why he was still working for Apple. That one scene for me is the essence. Jony exposed and phrased Jobs’ believe in such a way that made me realize that the iMac was not just a colored Macintosh. It was the result of a belief adopted by some that goes beyond many minds. Jony respected the belief of Jobs and practiced it, a believe that was there right from the start what seems to be necessary to really make a movement. I am a dreamer and I strongly believe in these kinds of underlying thoughts, emotions and feelings that can create a product or service that will stand out.

Those crazy guys who started building a computer for personal use, that creates freedom of spirit of mind and enables all individuals to create what they want, what they believe in, at that moment they started to change the world.

Back to the roots

I immediately realized that I haven’t gone deep enough to really understand the roots and the believes of the company I am now working for, Exact. The story is quite similar to how Jobs and Wozniak started their business. In Exact’s case it were Van Nieuwland and Hagens that started in their garage 30 years ago. What kind of believe you need to create outstanding accounting software back in the old days? You are tempted to think of this question in our current spirit of age. And that is a big mistake because 30 years ago the world was looking completely different. There were hurdles, battles and fights you had to win we can not think of today. There were hurdles, battles and fights you had to win we can not think of today.Things are so obvious today which were definitely not at that time. And that I think is something, at least for me as a marketer, I really and truly need to understand: the belief of these guys at the inception of Exact. We do have something on the shelf that has the potential to change but it needs more substance. I am inspired by the way Google is introducing Google Glass with Explorers, fans and closed communities that are improving the product. I am inspired by the Jobs movie that tells me to respect the belief that was there. Well, lets start gathering all pieces of the puzzle and try to go beyond, deeper and further. 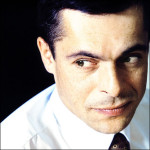 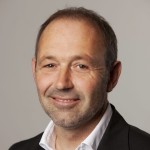 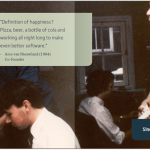